Citing a report from Zillow, the WSJ went on to say, "An even larger number of homeowners are either underwater or have so little equity in their homes that they wouldn't be able to cover expenses when selling and make a down payment on a new home. This "effective negative equity rate" was nearly 35% at the end of the second quarter." That 35% figure is for all homeowners with mortgages, so the percentage is even higher for homes in the bottom third of home values -- homes that would normally provide the inventory for new first-time buyers.

Sales to first-time home buyers are what fuel the demand for homes in the higher price ranges. What happens when home owners of lower-priced homes can't afford to sell their homes and move up? The whole market shrinks.
Action Steps You Can Take

There are approximately 48 million homes with mortgages in the United States. If 35% of them have effective negative equity, that means we have almost 17 million homeowners who are in a position where they cannot realistically afford to sell their homes, and a disproportionate share of that number are in the lower price ranges. This represents a considerable amount of shadow inventory that, if released,  could provide considerable stimulus toward a housing recovery. 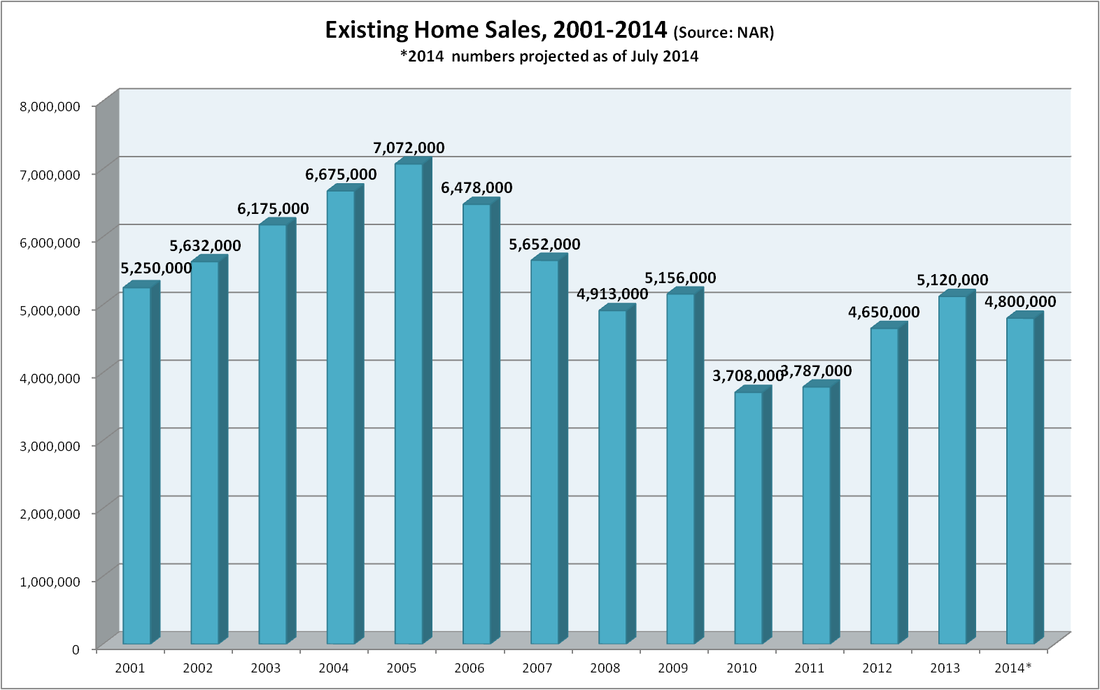 The homeowners we are interested in, though, are the people who have been able to stay current with their mortgage payments – and they represent the large majority of homeowners who have found themselves with an effective negative equity. Not all of them, obviously, would want to sell their homes in any event.

But how would you advise those who would like to sell and move?

Every homeowner's position is unique. But generally speaking, there aren't many options: the homeowner can stay put and hope that his home's value will rise to the point where it eventually becomes feasible to sell.  There is no telling when, or even whether that point would ever be reached, and even if it is reached, there is every likelihood that we would then be in a higher interest rate environment – which could affect the ability of buyers to qualify to purchase the home, and would also affect the homeowner's ability to buy another home.

Another option is to begin making extra principal payments in order to reduce the mortgage loan balance to a point where the owner could sell, even at today's values, and have enough left over for a down payment on a new home. Paying down principal just so you can afford to sell your house is not going to seem like an attractive option for most people. The fact is, either their timing was bad (they bought at the peak of the market, just before the crash), or they paid too much for the home, or a combination of both. Whether it's fair or not, they have lost money on this particular "investment". The only question is, are they going to take the hit now, or later, or are they going to leave it to their heirs to take the hit?

A third option would be a combination of the first and second options. You start paying down principal and you hope your home's value improves in the meantime.

And finally, some homeowners could be in a position where they may be receiving an inheritance, or have the option of borrowing from a retirement plan, selling assets, or receiving a cash gift from a family member. They could sell their home and absorb a relatively small loss, and use the inheritance, cash, or other windfall for a down payment on a new home.

How to Identify Homeowners Who Could Potentially Benefit

Work with a Realtor Partner and look for reasonably well-maintained neighborhoods that fit the price range of first-time home buyers. I suggest you would be particularly interested in homes that were purchased between 2005-2008 where the owners' age is between 35-45.

Put together, with your Realtor Partner, a series of targeted, co-branded postcard mailings to people who match the profile I have described. You and your Realtor Partner would be offering a free Market Analysis of the prospect's home (done by the Realtor), combined with a free Financial Analysis (conducted by you). The Realtor helps the potential Seller get a sense of what their house would sell for. Your job would be to interview the potential Sellers to understand what their goals would be, and what they would be looking to accomplish if they were to sell their home and buy another. With that information, you could put together a financial analysis that shows the prospective Sellers how likely it would be that they could accomplish their financial and personal objectives by putting their home on the market.

If any good at all will come from the housing crash and financial crisis of 2008, it will come because enough people understand its true causes. I have written on this subject before, and I'm not going to go into it again here. Suffice it to say that politicians and interest groups (which I will stipulate may have been well-meaning) created an environment of declining lending standards in the interest of making homeownership more "affordable". The banking industry went along with it, partly because they had to, and partly because the GSE's created a market where these loans could be packaged and sold, so lenders (incorrectly) believed they could make these loans with little or no liability. By expanding the pool of people who could qualify for mortgage loans, we created a demand for homes that far exceeded the supply available at the time. And that inevitably caused dramatic inflation in home prices – in other words, a bubble.

I believe loan officers not only owe a fiduciary duty to their lenders and investors, they also owe a similar duty to their home buying clients – to teach them what they need to know to protect themselves in a real estate negotiation so that they do not pay more for a home than recent comparable sales would suggest that home is worth. To the extent that we participated in blowing up that bubble starting about 10 years ago, we bear some of the moral responsibility for what happened to the millions of people who were hurt, and who continue to be hurt by the crash and the recession that followed it. Ask yourself: are you doing everything you can do today to help your clients avoid getting caught up in the next crash?


Related: Who's Got Time For That seminar series free training videos
How to Get a Free Coaching Session